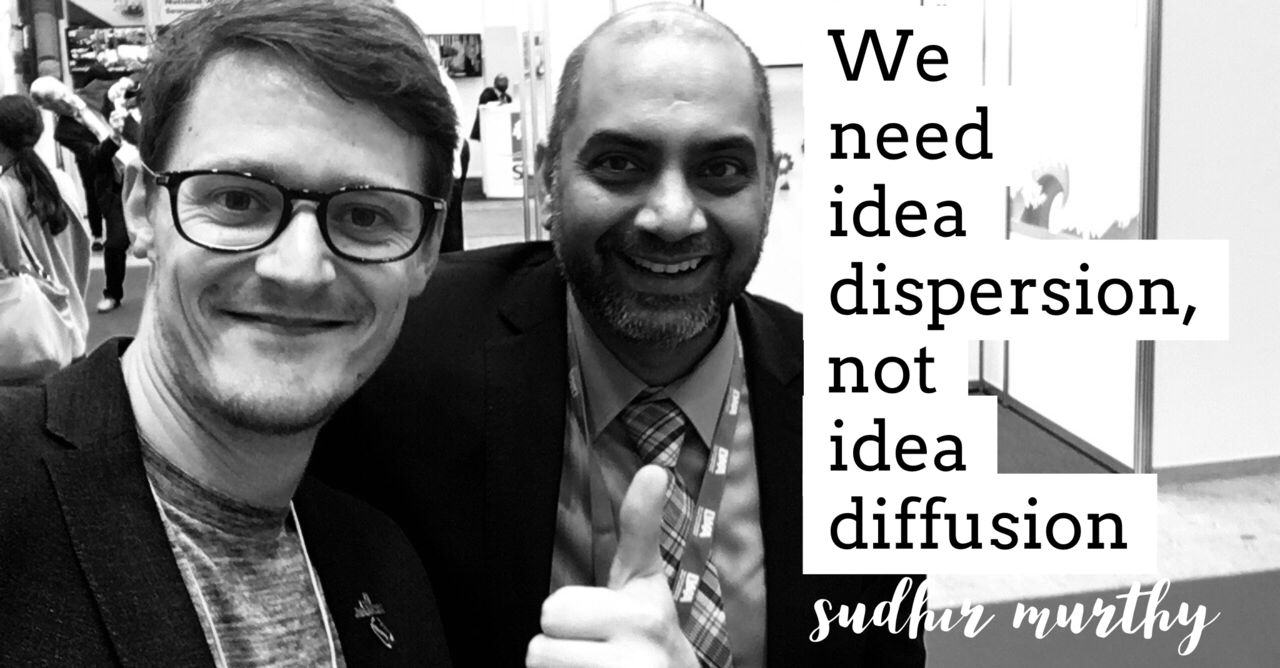 Sudhir Murthy worked at the leading utility DC Water for the last 16 years. First as R&D manager, then as innovations chief. He now started his own entrepreneurial adventure with NEWhub. Talking with him at the #WorldWaterCongress in Tokyo was quite inspiring. Actually I share that passion for water innovation and we both agree that so many opportunities exist. In fact, much more than anyone can ever individually harvest.

It reminds me of the following quote:

Ideas are like rabbits. You get a couple and learn how to handle them, and pretty soon you have a dozen - John Steinbeck

But ideas are not enough:

And here we come to the core of his message and vision. During his morning keynote he stated that ‘idea diffusion is too slow, we need idea dispersion’. (thanks Sudhir for explaining it in CFD terminology) Hence, if you want to do everything on your own, you go slower, will miss opportunities and will create less impact. For example: a certain utility may have developed a very innovative concept, but might end up as the only utility applying it while others could also benefit from it or even improve the concept. ‘Linear models do not work’ (i.e. research first, then development, then application, all happening in silos). Networks such as IWA can play a role there. With evens such as #WorldWaterCongress, they increase the chance of ‘collisions’ of people and ideas. Here's another quote:

So Sudhir has put a big deal of his efforts not only in initiating innovation, but also in accelerating it and making it work. He advocates the 'open innovation model', whereby many people contribute to the innovation and share vision, efforts, responsibilities AND benefits. Each party involved has its role. The 4 big groups I saw on his slides were:

A good exemplification is the high amount of PhD researchers at DC Water (and also other utilities that openly innovate). If I were still to start my PhD, I would be very keen in doing such research. You combine scientific savvy with very practical and direct application of your ideas. I think that must be rewarding and stimulating. In my opinion, too many PhD students are trained on the idea side while not being trained nor motivated nor incentivized to make things work in practice and hence creating societal impact. Again: it is only succesful execution that creates impact. And executing jointly with likeminded people develops leadership, severely accelerates things and builds human relationships (which are proven to increase people's happiness).

So he is a connector, putting the right people on the bus from the start. A right mindset and values, a willingness to share, and right incentive systems are of major importance here. He explained a bit how the system within DC Water was set up. And it is clear that quite some other utilities are interested in that innovation model. With NEWhub Sudhir wants to further create positive societal impact. He described NEWhub as a 'Cleantech innovation company to franchise new technology that could be developed through an open innovation approach'.

Since I started my business together with some other likeminded people, I also realise that it’s all about giving more than taking. Once you have this ‘abundance mindset’, 'think innovation', you see much more opportunities than you will ever be able to realize on your own. So it’s better to disperse and make things work in collaborative efforts while not forgetting the rewards. Sudhir convinced me that also the latter is very important to make this vision work for a long time. Hence, it is not unthoughtful sharing of free information.

I think the open innovation model is a very nice example of a win-win. A win for society and a win for the people involved, both personally and career-wise. And if I may conclude: ‘it’s all about the people’