This is Part I of a series of three articles describing a globally unique advanced modelling project in the water sector, explained in a practical and easy way. Yes, quite extensive, but it reads fast. Although focused on wastewater here, ‘drinking water people’ can also benefit from reading it. By the way, if you don’t like reading (or you can’t wait),just scroll down and watch the explanatory action movie immediately. This part focuses on measurements and unprecedented model validation using a construction crane. More details of such projects are made available in the AM-TEAM newsletter. (PS: PART II is also out)

1. The full-scale plant and the problem to solve

The Eindhoven water resource recovery facility (WRRF) is a 750,000pe conventional activated sludge plant, operated by Waterboard De Dommel (Netherlands). While the plant operators want to lower effluent nitrate, low levels are hard to get, especially during cold weather. Finding optimal performance of the existing bioreactor is done before a plant upgrade with an advanced denitrification step to see if upgrade is needed. Both our previous modelling work and practical observations have shown that elevated oxygen levels near the intake of the anoxic tank may hinder denitrification in the bioreactor, so this is where we pointed our arrows on.

3. The strategy - what is the value of modelling?

As conventional trial-and-error testing would be risky, laborious, time consuming and would provide limited testing freedom and knowledge extension, Waterboard De Dommel decided to adopt a structural advanced modelling approach. Our proprietary CFD-biokinetic model developed throughout the years was ready to use, so we could start fast. First, we wanted to extensively validate the model to remove any remaining doubt about model validity. Actually, we wanted to demonstrate the validity of an advanced model like no one did before. And this is where this article is about.

Questions for the validation:

4. Why the heck did we hire a construction crane?

I will answer your question immediately: no, you don’t always need a crane for model validation. 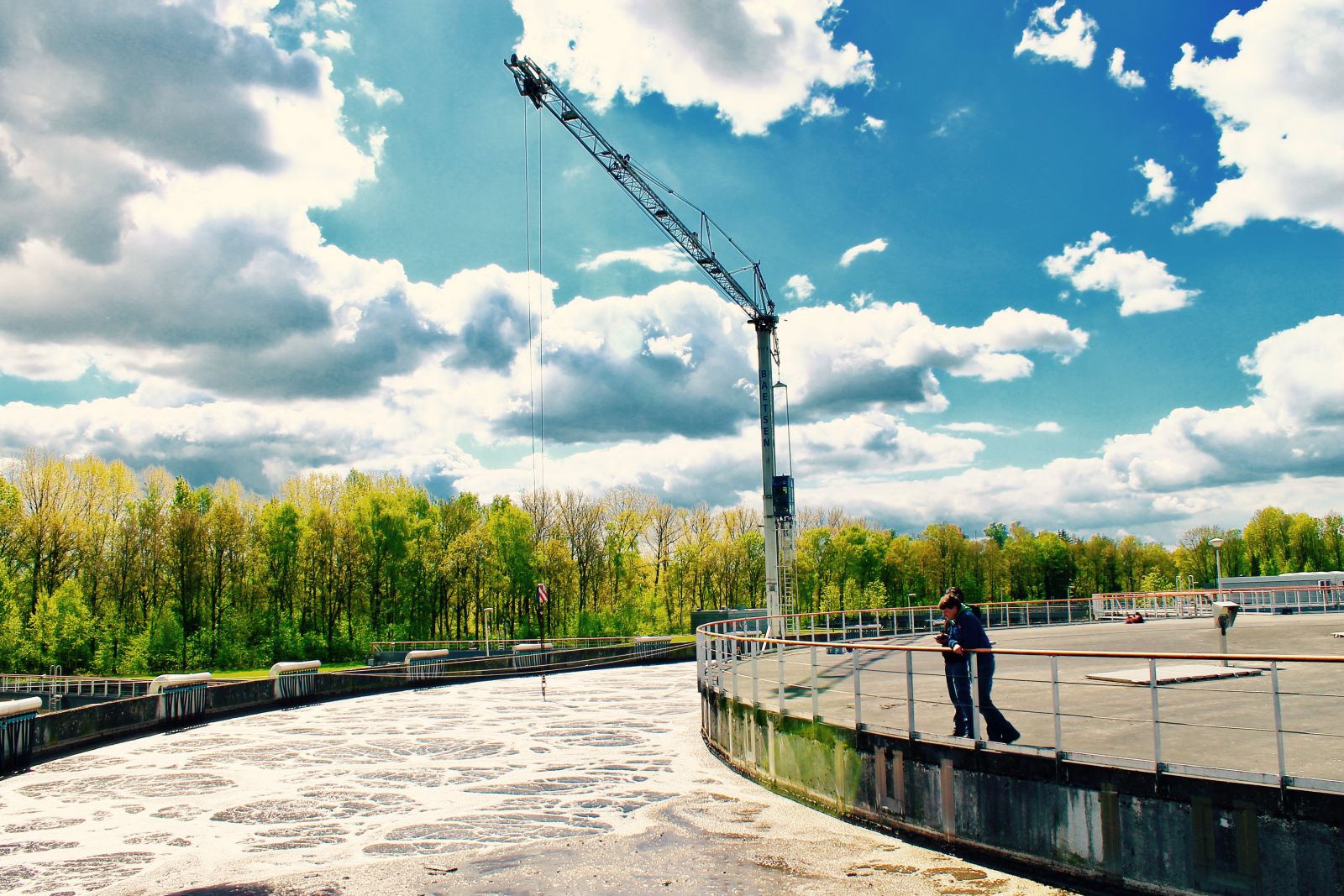 But if you have it, you can collect a rather spectacular data set. The crane allowed us to perform extensive oxygen profiling, leading to a 3D image of oxygen levels along the depth, width and length of the large bioreactor. This is an ideal dataset to compare to the 3-dimensional CFD results. We measured a whole day and collected oxygen data at 99 locations in the bioreactor. If we add the sensor of the bioreactor, we reach 100 (hurray!). 3 LDO sensors were attached to the chain of the crane, leaving several meters of spacing. A 700 kg concrete block had to keep the chain vertical, and it luckily did without detaching. 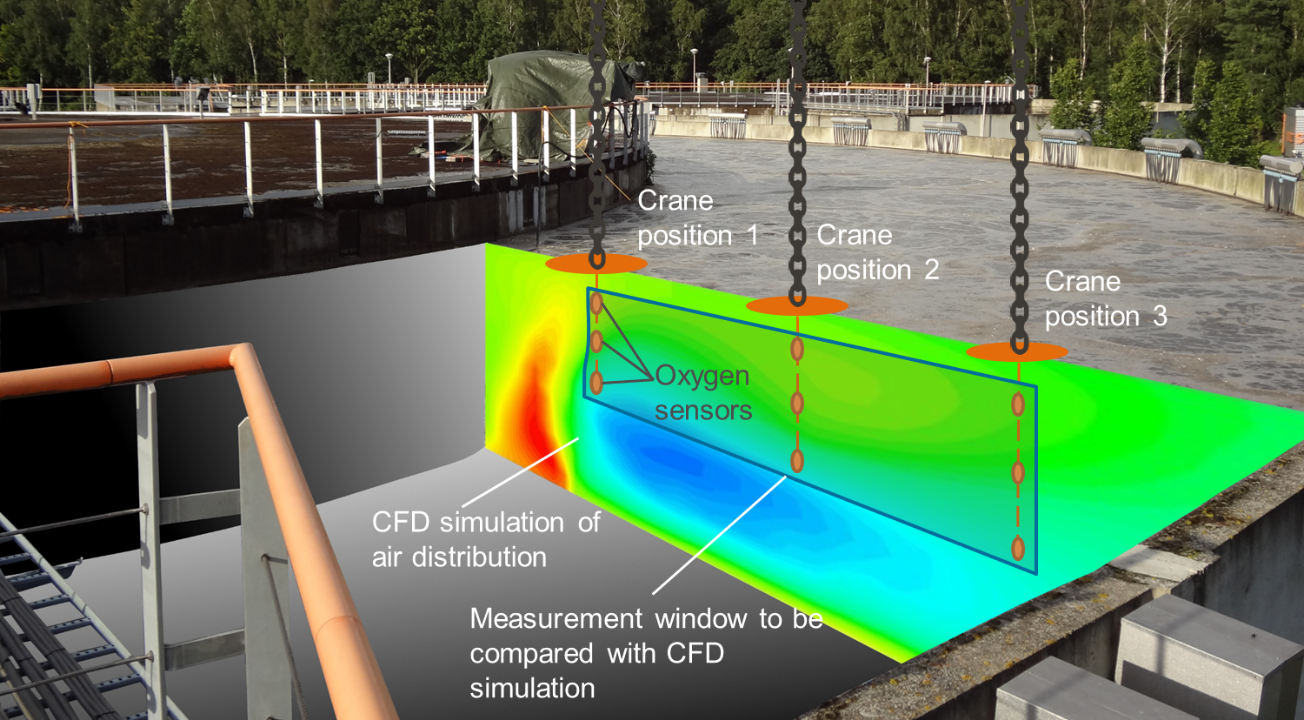 Figure 2: Submerging the oxygen sensors with the crane along one cross section

Besides oxygen, we collected velocity data at 8 locations, along the depth of the reactor. Also these local velocities of flow were then compared to model outcomes as an extra validation variable adds a lot of information. To challenge the model and collect extra information, the plant operator doubled the aeration rate halfway the measurement campaign.

5. Why is the model so accurate?

In many cases we have seen people applying rather simple CFD models to model activated sludge systems. For example, the density of clean water is used and other dangerous assumptions are made (eg. how the aeration system is modelled). Based on our experience, these simple approaches have very limited accuracy and hence, value, while also these cases produce nice colourful drawings. Our activated sludge model was developed and improved throughout the years and contains proprietary equations. Further, biokinetics (e.g. ASM1) are integrated, so the model is also able to calculate sludge, nutrient and carbon conversion rates and concentrations in 3D. Flows and concentrations can be simulated within a couple of hours, making testing of many different scenarios possible. AM-TEAM co-founder Dr. Usman Rehman developed this model during his PhD at BIOMATH, UGent under supervision of prof. Ingmar Nopens and in collaboration with Waterboard De Dommel.

The next graphs show velocity profiles across the depth of the reactor. These recordings relate to a cross section: the blue data points were recorded near the inner reactor wall, the brown ones close to the outer wall. Using the simple, and conventional, CFD modelling approach, we typically obtain an accuracy as shown left. 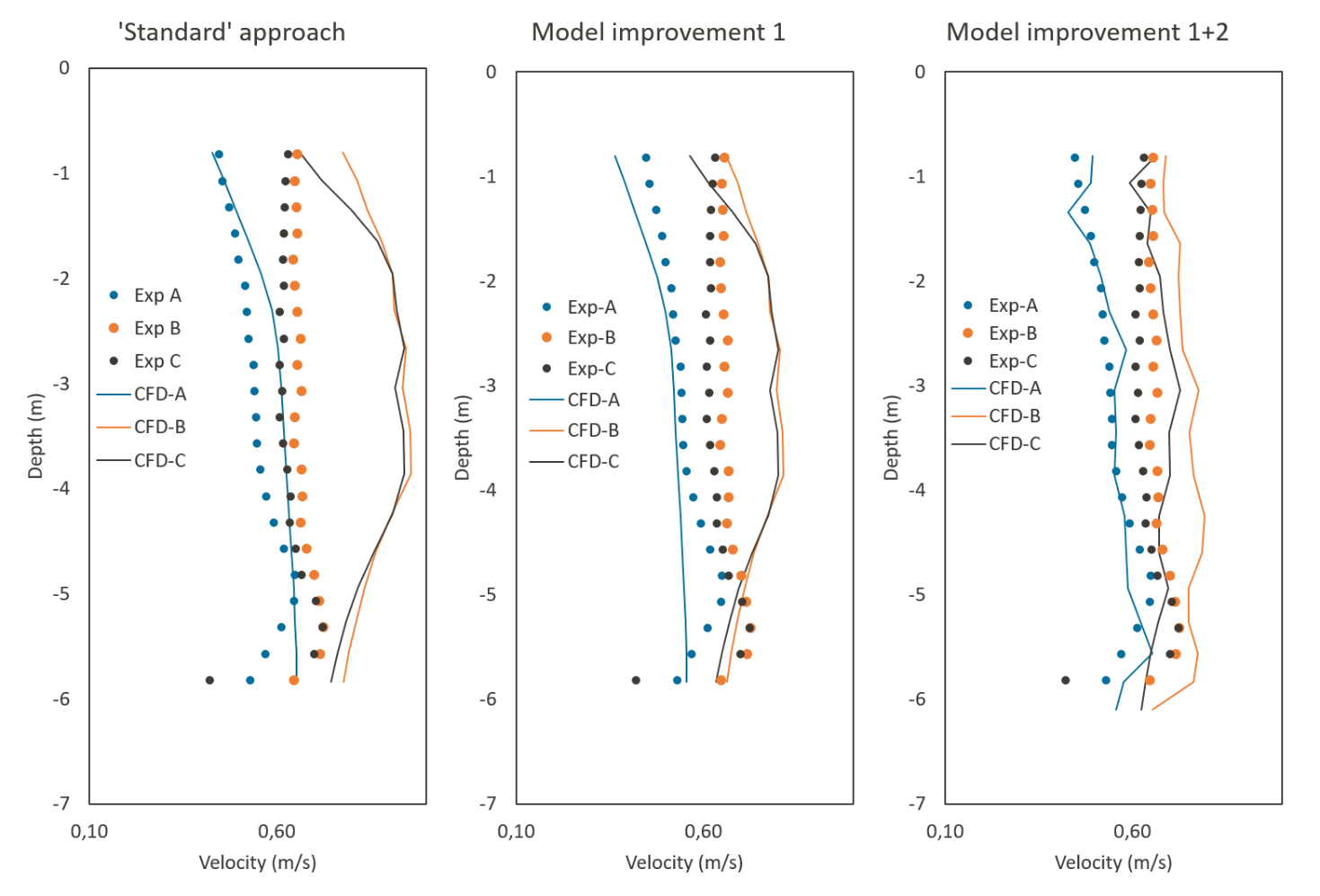 After a major improvement, the fit in the middle was obtained. After further improvement of the model with a second major feature, we ended with the fits shown on the right, and in detail further. We were happy to see that the model accurately describes the data trends, which means the main mechanisms were taken into account. Adding more resolution to the CFD model clearly increased model accuracy and value significantly. 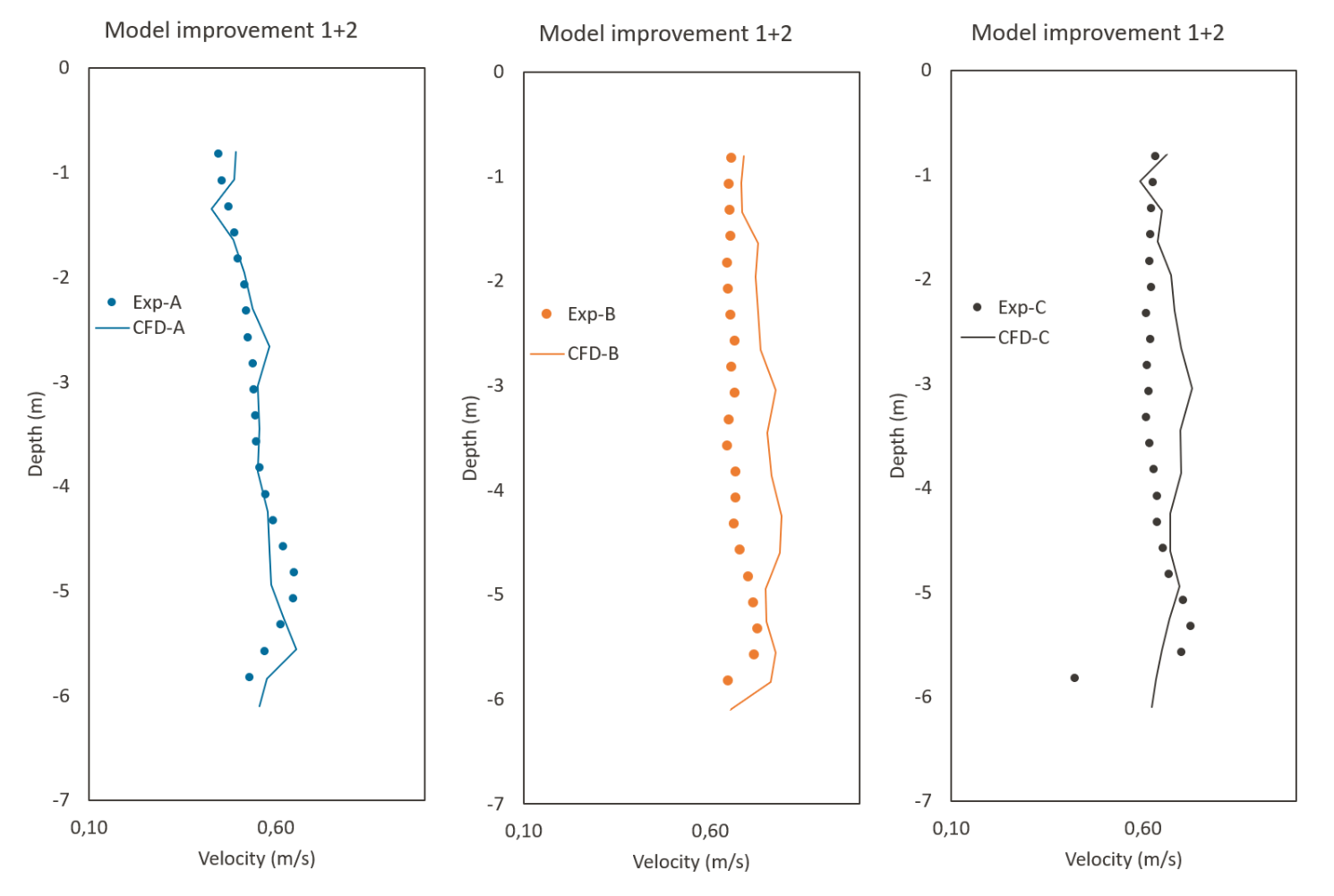 The figures below show comparisons between dissolved oxygen data and simulated air distribution at 4 locations. The biokinetic model was not yet activated at this stage of the project, so there is no simulated oxygen data yet. However, we can assume (and we have seen in past) that DO levels and air are correlated and that more DO can be found where more bubbles are. 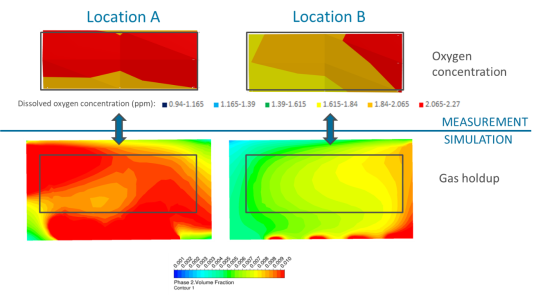 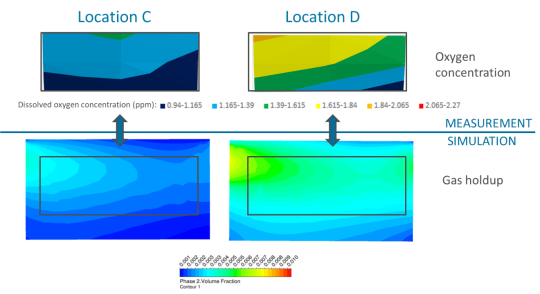 Figure 5: comparison of air distribution (gas holdup) and measured DO concentrations at 4 locations in the bioreactor (A and B are in the aerated zone)

Measured oxygen gradients looked as we expected based on the CFD outcomes.

Although many readers will know this, it is worth repeating that water and air are no best friends, resulting in typical hydrodynamic segregation of the phases. Bubbles like being together, probably reducing the overall area available for mass transfer.

These results were partially presented at Weftec 2017 (Chicago), the IWA Large WWTP conference in Chongqing (China),and will also be published scientifically.

Want to continuously stay updated on such projects? Opt in for our newsletter (see below) and follow us at social media (see buttons).

Next articles (+ videos) to come